The relationship of aid in medicine is configured according to different styles according to two main elements: the disposition of the doctor and the use of his power.

Depending on the doctor's (assistant) disposition, the helping relationship can be centered on the clinical problem or centered on the person of the patient (helped). In the first case, the assistant identifies above all with the problem or the situation presented by the subject, without taking into account the subjective aspects with which the problem is experienced by the subject. For example, if the helper communicates a moral problem that distresses him, the helper focuses on it, leaving aside the emotional resonances that such a problem can provoke in the helped person.

In the second case, the helper pays attention above all to the person, to the way in which the person lives the problem, takes into consideration the individual as a whole (feelings, values ​​...), convinced that the other needs above all feeling understood, reassured, totally welcomed. It is, therefore, a rich style of empathetic understanding. The two styles described represent the two ends of a continuum.

Depending on the assistant's use of power, the relationship of help can be directive or facilitating. In the first case, the helper exerts, above all, a power that is outside the person helped: for example, the competence itself, the role itself ... In doing so, it tends to help the person by leading them in a certain direction , inducing her to think, feel or act according to a certain scheme, with little confidence in the operational validity of the capacity for self-direction, which every person is endowed with. In this type of help relationship, the helper uses a set of behaviors and techniques that are in line with persuasion, the proposal of immediate solutions, moralizing judgments, reprimands, manipulation, blackmail, blame, reference to the role itself or competition.

In the second case, the helper mainly resorts to the power, authority, and resources present in the person helped, and his intervention is aimed at helping the interlocutor to become aware and use them creatively. The one who adopts this style tends to make proposals, give suggestions and inform, propose alternatives ... Active listening and understanding assume great importance, and the counselor strives to put them into practice using appropriate techniques, such as reformulation, self-disclosure , etc., to better channel the understanding of the state in which the interlocutor is and to encourage him.

When directive and facilitating attitudes are combined with those centered on the person and on the problem, later styles of relationship of help in medicine are obtained, as observed in the following figure: 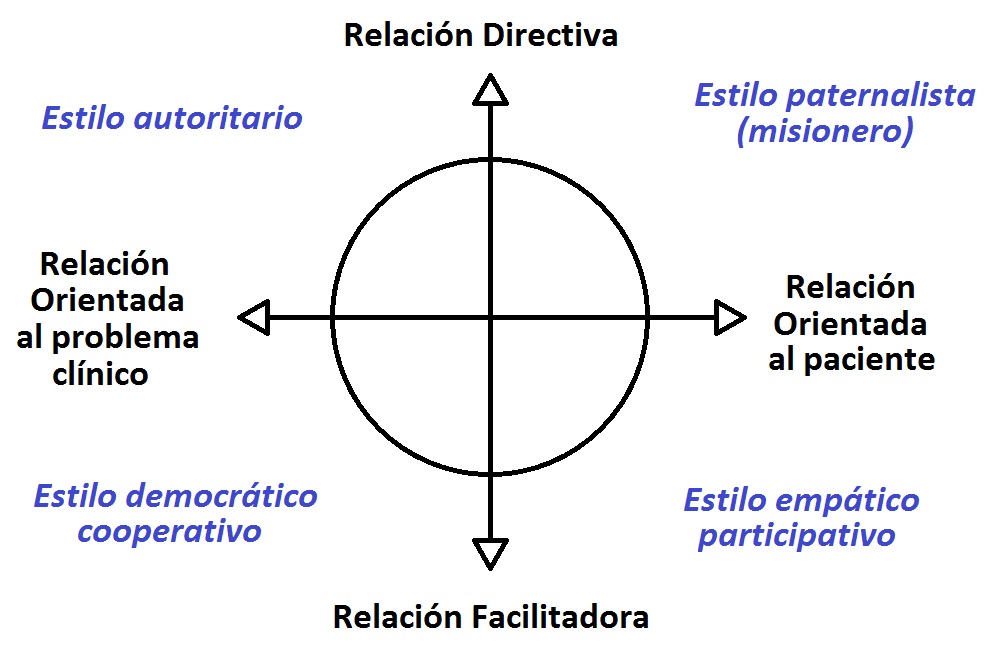 Authoritative style ("Manager"): This occurs when the assistant focuses on the problem of the helper and wants to help him solve it in a directive way. Focusing more on his own resources than on those of the interlocutor, he tends to establish a relationship of dominance - submission with him. The person helped is considered as a simple executor of a project that the health worker clearly has.

An example can help better illustrate this type of helping relationship. A young woman turns to an aid professional whose style is authoritative and says, "It seems to me that life has no meaning. I don't know why I should go on living day after day." Here are some of the responses you might get from this type of helper: "You listen to me. Take a week off; do some relaxation exercise; give leisure a little more time ..."; or "I had already told you that if you had not changed your lifestyle, you would have inevitably reached this point"; or also: "The problem of the meaning of life is not solved by useless lamentations: you have to react, so ...".

Democratic - Cooperative style: Also the one who uses this style, focuses on the problem of the interlocutor. The attitude it adopts, however, is facilitative, that is, it tends to involve the person found in solving the problem. Instead of imposing it, the counselor proposes solutions, helping the interlocutor to find valid alternatives and encouraging himself to use his own resources to achieve this end. In the example cited above, the agent will be able to answer: "Faced with the problem you are experiencing, the solutions presented are diverse; you find one. It would be appropriate to see if it is the only one. What do you think?", Or Well: "Your question is difficult, or I do not feel able to answer it. I would, however, like to work with you to deepen this topic so that you can find the best solution for you."

Paternalistic style: In this third style, the assistant focuses on the person of the interlocutor, that is, he takes into account "how he lives" his problem. His way of intervening is managerial and this is expressed in different ways. He may have the tendency to consider the other under his own protection, assuming responsibility for the situation in which he lives. This tendency can even go as far as pretending to save the person helped. Paternalism implies an approach to the helped, but does not trust him, but feels responsible for carrying out the salvation of the other. Both demonstrate an attention above all "to what I wanted you to be". In the example cited, the following answers would fit: "I see that you are living a difficult moment. Trust me and you will see that I will make you get out of this tunnel"; or: "Come on, It is not to lower yourself so much. I know many people who live difficult situations like yours and have always managed to free themselves from their anguishes ... "

Empathic-participatory style: The health worker focuses on the person and his interventions are inspired by the facilitating attitude. Attentive to the experience of the interlocutor, he is interested in making him aware, thus deepening his knowledge of himself. The phrase "It seems to me that life has no meaning ..." could be answered: "The moment you are living is so difficult that you wonder even if it is worth continuing to live in this situation", or: "It is difficult to face life when everything seems so dark. "

In our clearly efficient society, a style of intervention that achieves immediate results is privileged. Where a culture that favors indifference reigns, it is understood that response models are preferred that do not affectively compromise.

Among the different ways of responding, a question arises: is it necessary to privilege a certain style? In reality, all styles can have their place in the doctor-patient relationship, or as conceptualized in these notes, in the relationship of aid in medicine, knowing how to use them with flexible selectivity and taking into account the different elements of the specific situation. . The humanistic perspective, which supports this model, states that the empathic - participatory style would constitute the professional and service attitude that would better represent the essence of the physician 's role.

From this grassroots attitude, expressed through empathetic responses, directive interventions could also emerge, when circumstances require. For example, this can happen when people are very weak and vulnerable, in times of confrontation, in crisis situations or in medical emergencies. The empathic-participatory tendency can then prevent:

The importance of knowing how to use different styles of relationship with flexible creativity helps in medicine, especially when help is offered through brief and casual contacts in which it is not possible for the doctor to lead the patient to understand that their immediate wishes They may not necessarily match your priority needs.