We will refer, successively, to the examination of the upper limbs (hand, elbow and shoulder), the lower limbs (foot, knee, hip) and the spine.

Hands . The physical examination of the limbs begins with the examination of the hands, which must be evaluated in their shape, size, color, temperature and mobility. In the hand, the bony protrusions of the radius and ulna are identified, and the wrist joint is palpated on the back of the hand. The carpal bones are not palpable, but the metacarpals are. In the extension of the hand, the tendons of the finger extensors are observed. On the palmar side, the thenar and hypothenar eminences should be identified. The color of the hand will have the color variations described in the general part of the skin examination. The profession of the patient must be taken into account, which can influence the color and shape of the hand.

The temperature of the hand is appreciated from the beginning of the interview, when we shake the patient's hand. In a temperate environment, it should have a temperature that does not differ from body temperature.

Along with the examination of the hands, the nails will be inspected for their shape, size, consistency, and the coloration of the nail bed. 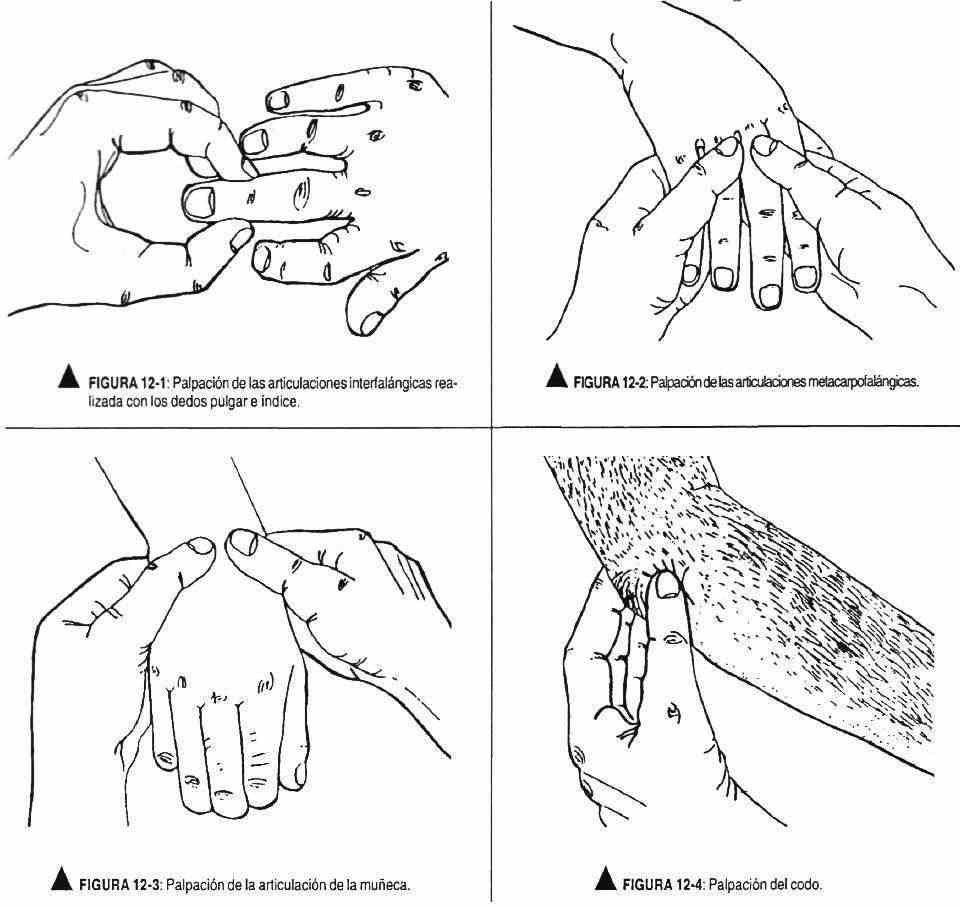 Codo . It is evaluated by inspection and palpation (Figure 12-4). The olecranon, both epicondyles, and the joint interline are identified. The synovium is palpable between the olecranon and both epicondyles. In the ulnar sulcus, the ulnar nerve can be palpated. The elbow has movements of flexion and extension, pronation and supination. Shoulder . It is evaluated through inspection, palpation, percussion, and examination of its motility. The sternoclavicular joint, clavicle, acromion, head of humerus, and scapula are identified. The anterior end of the acromion can be palpated and marked with ink and, with the clavicle elevated, the acromioclavicular joint palpated. Below and inside is the coracoid process, identifying it with a point. The greater tubercle of the humerus is palpated below and outside the acromioclavicular joint. The triangle thus formed orients on the anatomy of the shoulder (Figure 12-5). 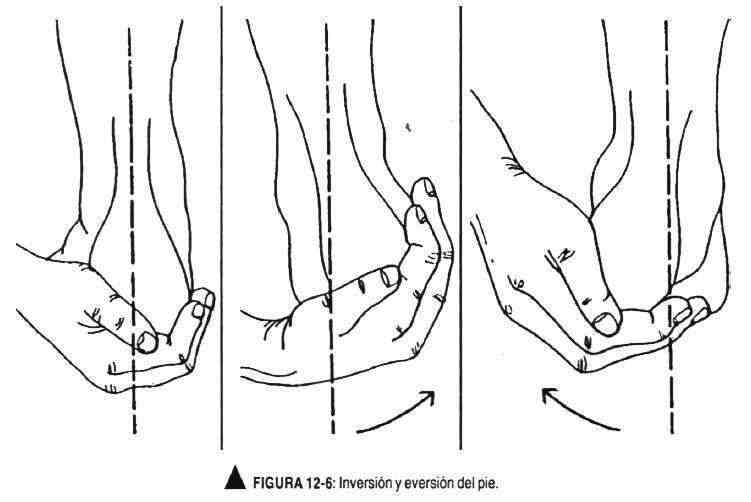 The deltoid, supraspinatus, and infraspinatus muscles should also be inspected. The bone contour and the position of the head of the humerus will be observed. By means of palpation the structures are delimited evaluating the muscular development.

The shoulder has movements of flexion, extension, abduction, adduction and internal and external rotation, and circumduction.

Foot . They are examined through inspection, palpation, and percussion, along with evaluation of their mobility. The shape, symmetry, coloration, temperature, and trophic state of the nails should be observed. The internal and external malleoli, the Achilles tendon, the head of the metatarsals, as well as the metatarsophalangeal and interphalangeal joints, and the tarsal bones will be palpated. It will be percussed to check the absence of pain. The heel should follow the axis of the leg. The condition of the skin, muscle trophism, and the presence or absence of hair should be observed.

Mobility is investigated with the dorsiflexion and extension of the foot; and taking the foot with the hand, it should be eversioned and inverted (Figure 12-6). In the calf, the skin, muscular trophism and the state of the venous system will be evaluated.

Knee . The examination includes inspection, palpation, and evaluation of motility. The anterior border of the tibia must be identified up to the anterior tuberosity of the bone, marking it with a point. 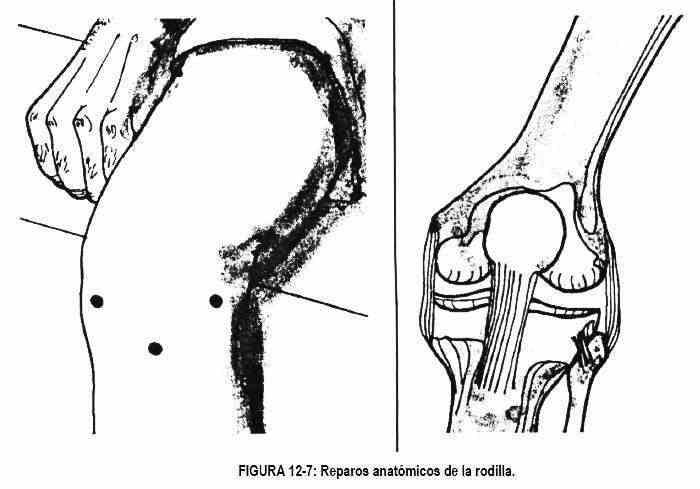 The edge of the tibia is then followed medially until reaching a bony prominence, the medial tibial condyle; The external tibial condyle is then located and both are delimited with a point, thus forming an isosceles triangle (Figure 12-7). Outside and below the external condyle is the head of the fibula. Then the thigh approximator tubercle will be located, below which the femoral condyle is located. The patella should be palpated, in the quadriceps tendon, and above it, the quadriceps muscle, which can be easily identified by contraction; It must have a concavity on both sides of the patella, above and outside of it. Below these areas is the joint cavity. The synovium is usually not palpable. On both sides of the joint space, on both sides of the patella, a fat pad is palpated. The knee has flexion and extension movements.

Hip . It is examined by inspection and palpation and its motility is evaluated.

It usually does not present any anatomical landmarks, except the greater trochanter, which can be palpated. Mobility includes: flexion, extension, abduction, adduction, internal and external rotation, and circumduction.

The Laségue maneuver (Figure 12-8) is performed with flexion of the lower limb, extended, which should be painless. Sharp flexion of the foot should not cause pain, and neither should hip flexion in conjunction with external rotation.

The observer should stand behind the patient and identify the spinous processes, paravertebral muscles, scapulae, iliac crests, and posterior superior iliac spines.

The line joining the iliac crests passes through the spinous process of L4 (Figure 12-9). Viewed laterally, the spine has a cervical and a lumbar concavity, separated by a thoracic convexity (Figure 12-10).

Once anatomical landmarks have been identified, their mobility should be evaluated. The neck is the most mobile portion. Flexion and extension are carried out mainly between the head and the first vertebra; rotation mainly between the first and second cervical vertebrae, while lateral movements occur in the rest of the cervical vertebrae (Figure 12-11).

The movements of the rest of the spine are subject to greater variation and require evaluation of flexion, extension, rotation, and lateral bends (Figures 12-12 and 12-13). 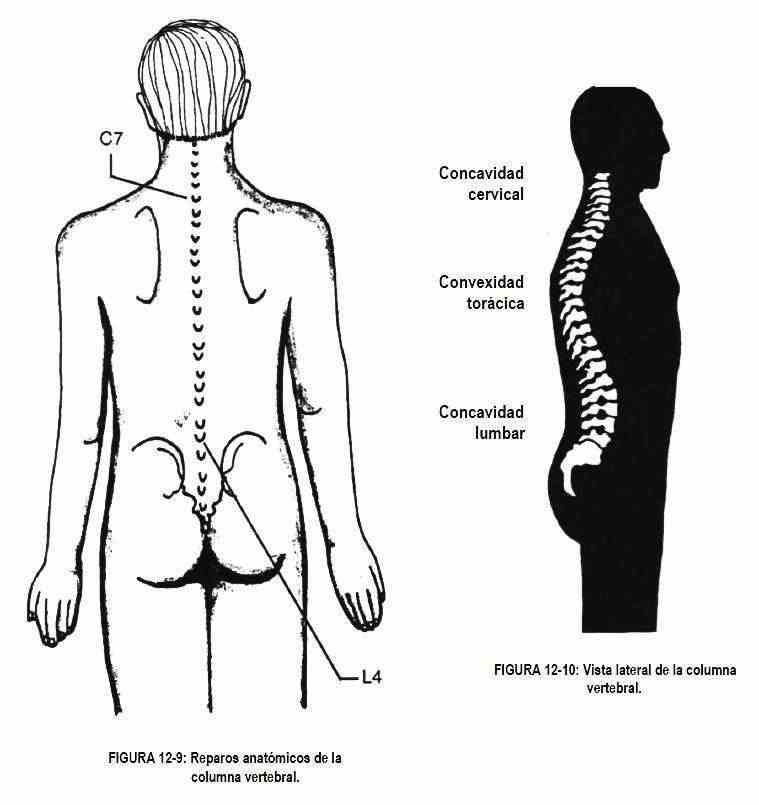 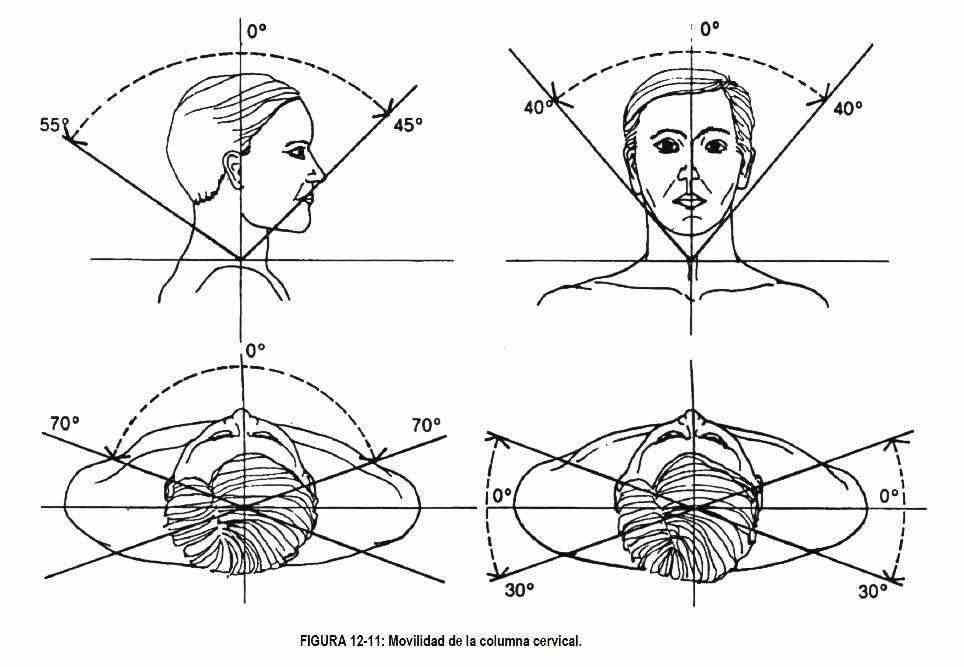