It consists of the hyperfunction of one or more parathyroid glands, with an increase in the serum concentration of the specific hormone, which causes hypercalcemia. Primary hyperparathyroidism is, along with cancer, one of the two most frequent causes of hypercalcemia (between the two entities, they account for more than 90% of pathological elevations in serum calcium).

The main agent of the homeostatic system that maintains the normal level of calcium in the extracellular fluid is the parathyroid gland, whose function only began to be known in this century. The physiological serum concentration of the calcium ion is approximately 1.3 mM; its relationship with parathyroid hormone (PTH) secretion is inverse and is graphed in Figure 75-1: as the calcaemia decreases, the hormone is released, which is inhibited by hypercalcemia, for example, caused by an infusion intravenous calcium, or by oral administration of a calcium compound easily absorbed by the intestine. The secretory response to very small decreases in calcium is instantaneous: it occurs in seconds.

Of the total circulating calcium, half is bound to plasma proteins, while the remainder either forms diffusible complexes (citrate, etc.) or is ionized. The calcium ion is essential for muscle contraction, neuromuscular excitability, cell membrane permeability, and blood clotting. In addition, calcium is a fundamental part of bone structure, and its circulating levels must be kept normal for proper ossification.

PTH acts on osteoclasts so that they resorb bone and supply the calcium and phosphorus contained in hydroxyapatite into the bloodstream. It also acts on the renal tubule to increase the reabsorption of calcium filtered by the glomerulus, to promote the excretion of phosphorus by reducing its proximal and distal reabsorption, and to stimulate the synthesis of calcitriol (1,25-dihydroxyvitamin D) from its precursor , calcidiol (25-hydroxyvitamin D), by action of the enzyme 1-alpha-hydroxylase. Calcitriol, in turn, acts at the intestinal level by increasing the absorption of calcium and phosphorus. Each of these physiological responses tends to raise total (and / or ionic) calcium in plasma, while phosphataemia does not vary, or decreases.

The sequence of the 84 amino acids that make up human PTH is well known, of which the first third - the one containing the amino end - is the one with biological activity; PTH1-34 and other fragments of the human hormone have already been synthesized.

In the parathyroid gland, hormone synthesis is made starting from a precursor, pro-PTH, which has 6 additional amino acids connected to the amino terminal end of PTH. Pro-PTH is synthesized in the rough reticuloendoplasmic system of major cells, and is transformed into PTH by proteolytic cleavage in the Golgi apparatus. In bovine glands, the pro-PTH content is approximately 10% that of PTH. There is no evidence that this precursor is released into circulation. There is also a precursor to pro-PTH, called pre-pro-PTH, with 115 amino acids (Figure 75-2).

Hypocalcemia increases the intracellular conversion of pro-PTH to PTH. PTH is stored in secretory granules; its release depends on a normal concentration of magnesium in the extracellular fluid. Both hyper- and hypomagnesemia inhibit it, perhaps due to an alteration of the exocytosis mechanism.

In peripheral blood, the intact or native hormone and various fragments are found, many of which have no biological activity but have the immunological identity that makes them recognizable by the different antisera used for radioimmunoassay. This “heterogeneity” of the circulating hormone is one of the causes of the difficulty that is sometimes found in the interpretation of the results reported by the laboratory. Although part of these fragments is secreted by the gland itself, the majority comes from the peripheral metabolism of the native hormone, which disappears from the circulation with a half-life of 1-10 minutes; the main sites of this tissue breakdown are the liver and kidney. The intact hormone is not able to mobilize calcium from the bone, which, on the other hand, does not remove it from the circulation. Instead,

Like all peptide hormones, PTH does not penetrate cells to exert its action, but binds to specific receptors on the cell membrane, which activate adenyl cyclase and generate cyclic adenosine monophosphate (cAMP) in the cytosol ("second messenger ”of hormonal action). When this occurs in the cells of the renal tubule, cAMP diffuses into the tubular lumen: its urinary levels rise rapidly after intravenous injection of the hormone; in fact, this is the earliest detectable response in vivo.

In hyperparathyroidism, the mechanisms that must control normal PTH secretion are impaired. The secretion is excessive and autonomous, that is, it is not slowed by the hypercalcemia that it causes. Contrary to what occurs in other causes of hypercalcemia, in which the serum concentration of PTH is low, here high levels of both calcium and plasma hormone coexist.

All it takes is one of the four glands (adenoma) to enlarge for excess hormone to be produced. This uniglandular hypertrophy is the most common cause (80%) of primary hyperparathyroidism. It is followed by hyperplasia of the four glands, while parathyroid carcinoma is rare (3% of cases). The loss of normal sensitivity of parathyroid cells to free calcium levels in extracellular fluid is the main pathophysiological mechanism of the disorder in most adenomas. In diffuse hyperplasia, the set point of the individual cells is the usual one, but as the mass of cells is increased, excess hormone is produced. The molecular basis of the disease is not very clear.

The ectopic secretion of PTH - that is, the production of the hormone by nonparathyroid tumors - is a well-established but relatively uncommon fact. On the other hand, pseudohyperparathyroidism is very common, which supposes the existence of a substance in circulation with effects very similar to those of PTH. The search for this mysterious humor led to the discovery of the peptide related to PTH (PTHrP), which shows great homology to PTH, and which is responsible for the vast majority of malignant hypercalcemia.

Some forms of hyperparathyroidism are inherited. There are two types of neoplasms or multiple endocrine adenomatosis (MEN; Wermer syndrome), which are detailed in Table 69-1. Autosomal dominant inheritance appears to be demonstrated in most affected families. 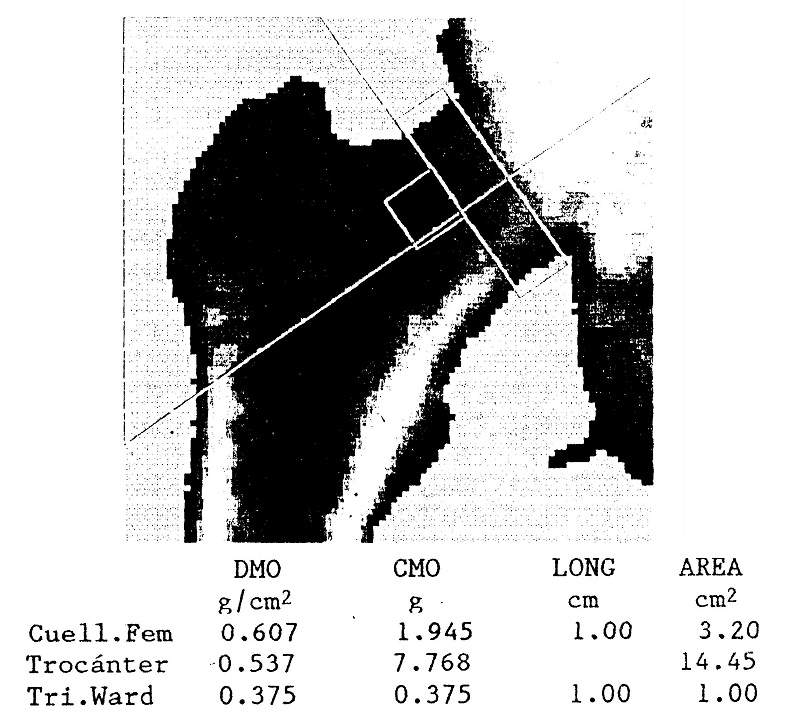 Osteoarticular manifestations . They are present in half of affected patients. There is usually vague or localized bone pain and arthralgia. Acute arthritis can occur due to the deposition of bihydrated calcium pyrophosphate crystals in the menisci and articular cartilages (pseudogout due to chondrocalcinosis), or of monosodium urate crystals (gout), with hyperuricemia and hyperuricosuria frequent in hyperparathyroidism.

Radiology may show diffuse osteopenia (this is the most common finding), vertebral crushing, bone cysts in the long bones (Fig. 76-3), and subperiosteal resorption in the radial aspect of the first phalanges of the fingers (Fig. 76-3). 76-4). Sometimes the skull cap has a finely speckled ("salt and pepper") appearance that is not pathognomonic. The lamina dura of the dental alveoli may be thin or absent. Calcification of articular cartilages, the typical sign of chondrocalcinosis, can only be demonstrated radiographically; there may also be periarticular calcifications.

Renal manifestations . 55% of patients have nephrolithiasis, so that the classic symptoms and signs of this entity and its complications (renal colic, hematuria, urinary infection) are usually the first form of presentation of this endocrinopathy. The stones are usually made of calcium phosphate or oxalate and opaque to X-rays.

Kidney function may be normal or decreased. Tubular disorders are common: urinary loss of bicarbonate, with hyperchloremic systemic acidosis; decreased ability to concentrate urinary, with polyuria; renal glycosuria, aminoaciduria, etc. Intravenous pyelography helps to evaluate the urinary tree and also allows to discover, when they exist, calcifications of the renal parenchyma (nephrocalcinosis). Renal ultrasound is a non-invasive and useful method to evaluate the possibility of stones.

Muscular manifestations . Muscle weakness and easy fatigue are common symptoms. The first is more noticeable in the proximal muscles of the limbs: patients have difficulty taking off a shirt, standing up, or climbing stairs; there may be muscle atrophy. Nerve conduction velocity is normal, but electromyography and muscle biopsy show alterations compatible with denervation, without inflammatory changes. Serum enzymes (glutamic oxaloacetic transaminase, creatine phosphokinase, and aldolase) are always normal. So it is not a myopathy, but a neuropathy.

Gastrointestinal manifestations. Peptic ulcer is very common (more than 20% of cases). Hypercalcemia produces hypergastrinemia, and this leads to increased acid secretion in the stomach. The possible association of a parathyroid adenoma with a gastrinoma (Zollinger-Ellison syndrome) or with diffuse hyperplasia of the pancreatic islets, as part of a type 1 MEN, should not be lost sight of. It should be remembered, however, that these cases represent a very small part of the patients with the combination of primary hyperparathyroidism and ulcer disease. Pancreatitis, especially the chronic painful form, can be a digestive complication of hypoparathyroidism. It is already known that acute pancreatitis produces a decrease in total calcium; thus,

Other manifestations . Thirst, polyuria, constipation, anorexia, and abdominal discomfort. It is common to see mental disorders, with personality changes, depression, and even psychosis.

High blood pressure is usually associated, although this is probably due to the high prevalence of this disorder in the general population. Anemia should be added to the list of complications. It is moderate, normochromic, normocytic, and without an increase in reticulocytes (hyporegenerative anemia). Soft tissue calcifications such as the cornea (band keratopathy) and skin can be found, with skin necrosis.

Although the clinician should suspect primary hyperparathyroidism for any of the aforementioned symptoms and signs, it must be emphasized that most patients are asymptomatic, and that only a demonstration of their hypercalcemia could detect them. Hypercalcemia is the only invariable and omnipresent sign in the varied clinical picture of this disease. Without it, documented on more than one occasion by an accounting laboratory, it is not justified to subject the patient to other more expensive and time-consuming studies. The normal range for calcium is 8.5 to 10.6 mg / dl. Its interpretation requires that the serum concentration of proteins be known, since hyperproteinemia can cause an increase in total calcium levels, hypoproteinemia can mask hypercalcemia. The importance of taking several measurements of calcium must be emphasized, since its elevation can be sustained or intermittent. The latter occurs in mild cases, with calcaemia values ​​in the upper limit of the normal range, or only slightly elevated (“normocalcemic” hyperparathyroidism).

Other signs that should be looked for to confirm the diagnosis are:

Densitometry is much more accurate and reliable than plain radiography in detecting decreases in bone mineral content. Since primary hyperparathyroidism preferentially affects cortical bone, densitometric evaluation of bone sites with an abundance of this type of bone, such as the radial shaft or the femoral neck, should be preferred.

It is advisable to investigate calcium in all patients who consult for: