The manifestations produced by the injury of the different cerebral lobes are studied here, classified according to anatomical norms, precise in some cases, such as when delimiting the frontal lobe on its external face and arbitrary other times, such as when the occipital area of ​​the the parietal and temporal lobes.

This division is not related to cerebral circulation, since the great vessels irrigate more than one lobe and give a more extensive symptomatology, although well systematized. Nor does it show much association with subcortical projections or commissural systems. The size of each lobe is important, since the frontal one, which occupies more than a third of the brain, can cause more varied symptoms than the other small ones.

Frontal lobe (Fig. 83-1). It extends in front of Rolando's fissure and above that of Silvio and has several well-distinguishable parts. The most posterior (area 4) is motor and its injury is manifested by a contralateral hemiplegia which, when area 4 is taken exclusively, is initially flaccid and then acquires tonicity due to compromise of more anterior, premotor areas (area 6 ); if the injury is chronic, there will be entry spasticity accompanied by grasp and suction reflexes.

When the lesion is in area 8, also premotor and center of the conjugated movements of the eyes, the eyes cannot be turned to the opposite side and the patient looks towards the side of the lesion. If the process is excitatory -epilepsy-, the eyes deviate to the opposite side in a tonic way. Ahead of these regions, in the prefrontal zones, the alterations do not bring motor problems, but personality problems; lack of initiative with apathy, childishness and euphoria with unstable and unpredictable reactions; mild intellectual deficit with permanent placidity and complacency, lack of concentration and memory, poor attention, perseverance; This painting, which is rather poorly systematized, is called moria. Sometimes there are alterations in gait and posture that appear to be cerebellar in origin: this is Bruns' ataxia. 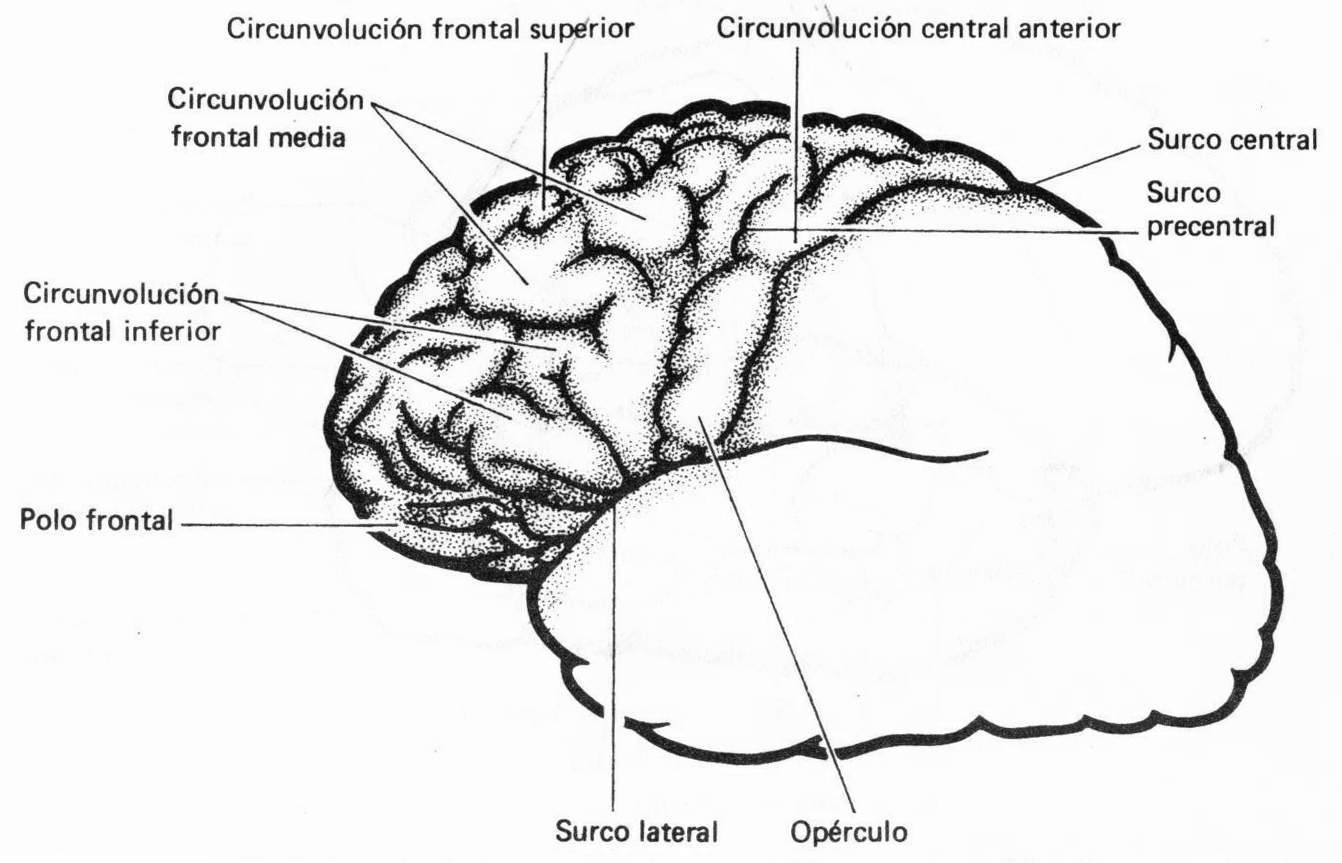 Parietal lobe. (Fig. 83-2) this lobe has a well-defined anterior limit, which is Rolando's fissure, and the anterior part of the lower one, which corresponds to Silvio's fissure; but in its posterior parts the delimitation with the temporal and occipital globules is ratifical, since there are convolutions of passage between them, which conditions some of their particular symptoms, especially on the dominant side. Among the symptoms originating in this lobe are some related to the afferent pathways of the sensory and visual systems; thus, a lesion of the postcentral or postrolandic gyrus will cause a contralateral hemianesthesia referred exclusively to the forms of discriminatory sensitivity, which is called cortical; includes among its most significant signs astereognosia,

The distribution of this alteration may be global in the opposite hemibody, or regional limited to various segments since the cortical location of the sensation is a postrolandic copy of the motor, with the most distal parts of the body in the highest portion of the gyrus. - and especially on its internal face - and the face in the lower portion. In parietal lesions, the sensory disorder is usually associated with a slight muscular atrophy that is more clear in congenital sessions. In addition, tactile hallucinations are described, such as persistence of the stimulus or double perception of a single stimulus; inability to locate it (alloquiria); defective discrimination of two points and, what is conceptualized as more typical, parietal extinction, that is, the perception exclusively on the healthy side of two stimuli applied symmetrically on both sides of the body. The visual symptoms are a lower homonymous quadrantopsia due to compromise of the highest part of the optic radiations when they surround the occipital horn of the ventricle; it is found in the low and deep lesions of the lobe.

But most of the lobe, closely related to the neighboring parts of the temporal and occipital lobes, seem to constitute a suprasensory integration center for sensory, auditory, and visual memories. And in relation to this function, it turns out that, in the temporal scheme, the outer space and the relationship of the body with the environment, of such importance for the integral conception of each person, would be fundamentally linked to these regions. Hence, one of the most interesting parietal symptoms is asomatognosia which, when unilateral, is always left due to a right parietal lesion, and which consists of the denial of a very frank left hemiplegia; It seems that a lesion in the other hemisphere could give a similar picture, but it is masked by aphasia on the dominant side; However, 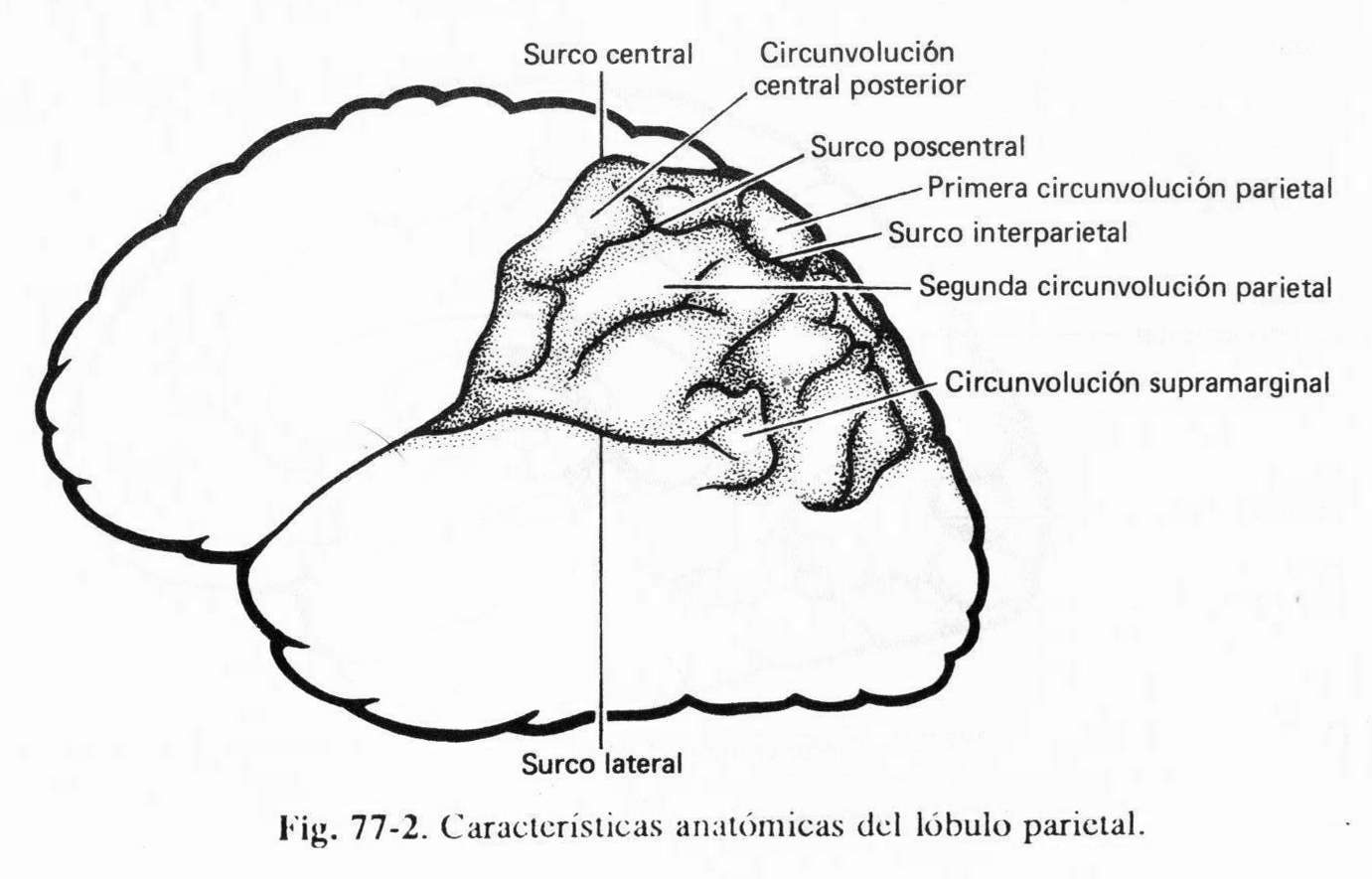 Temporal lobe(Fig. 83-3). In this lobe some very typical symptoms originate, such as uncinate epileptic seizures, due to injury to the anterior part of the hippocampus; they are olfactory, with a bad smell, some modification of the mental state such as clouding or twilight states, sucking, chewing and sometimes a taste component; they are sudden and short. On the superior face of Silvio's fissure, located deeply, is the transverse gyrus of Heschl, the cortical center of hearing, the lesion of which does not cause hearing impairment, because the representation of this function is bilateral; its stimulation can give auditory hallucinations -sounds- to vertigo, which in the epilepsies that originate there are the corresponding auras. There are superior hemianopsies of the superior quadrantopsia type (in the parietal lobe they are inferior) and complex visual hallucinations.

On the dominant side, the posterior lesions of the superior temporal gyri bring Wernicke's aphasia: jargonafasia, alexia, and inability to understand the spoken word. Nominal aphasia is also common.

Learning is admitted to be disturbed by auditory material, when there is a temporary lesion on the dominant side; while on the dominant side there is the same difficulty with the visual material. Surgical stimulations arouse visual, mnesic and auditory reactions with a great emotional component. According to the observed data, the temporal lobe plays an important role in visual and auditory perception, in learning and memory, and in emotional life. 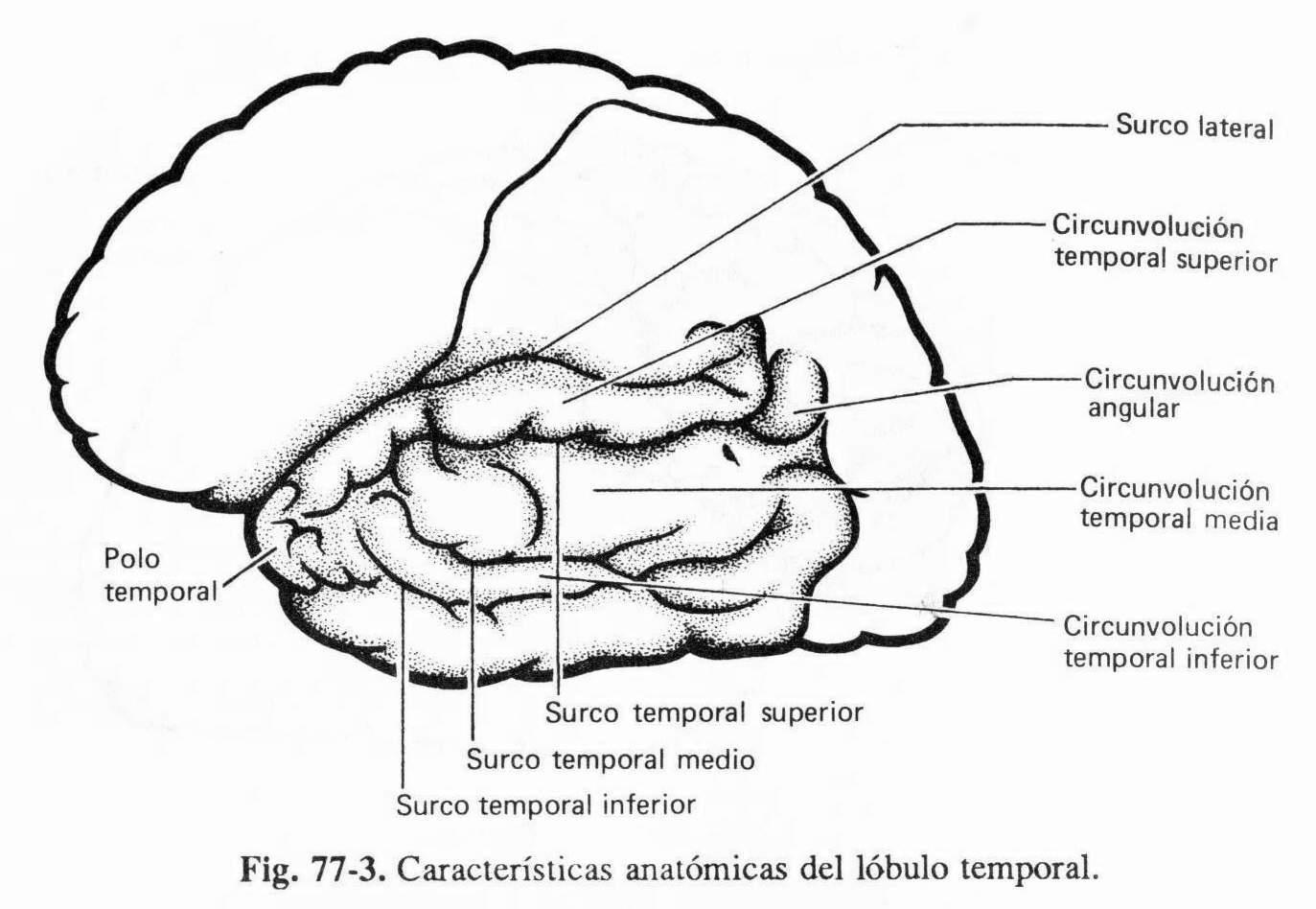 Occipital lobe . (Fig. 83-4) the most posterior area (area 17) is the cortical center of vision; its unilateral lesion brings typical homonymous hemianopia with preservation of the macular region; the bilateral one gives cortical blindness that is characterized because the patient sees “white” and usually does not recognize its serious deficit; He is a blind man with fundus and pupillary reflexes. When the lesion settles in the associative areas located further forward (areas 18 and 19), which is where the visual stimuli are integrated with each other, there are problems of visual re-eating - visual agnosia- and on the dominant side alexia, that is, inability to read for lack of recognition of written words. 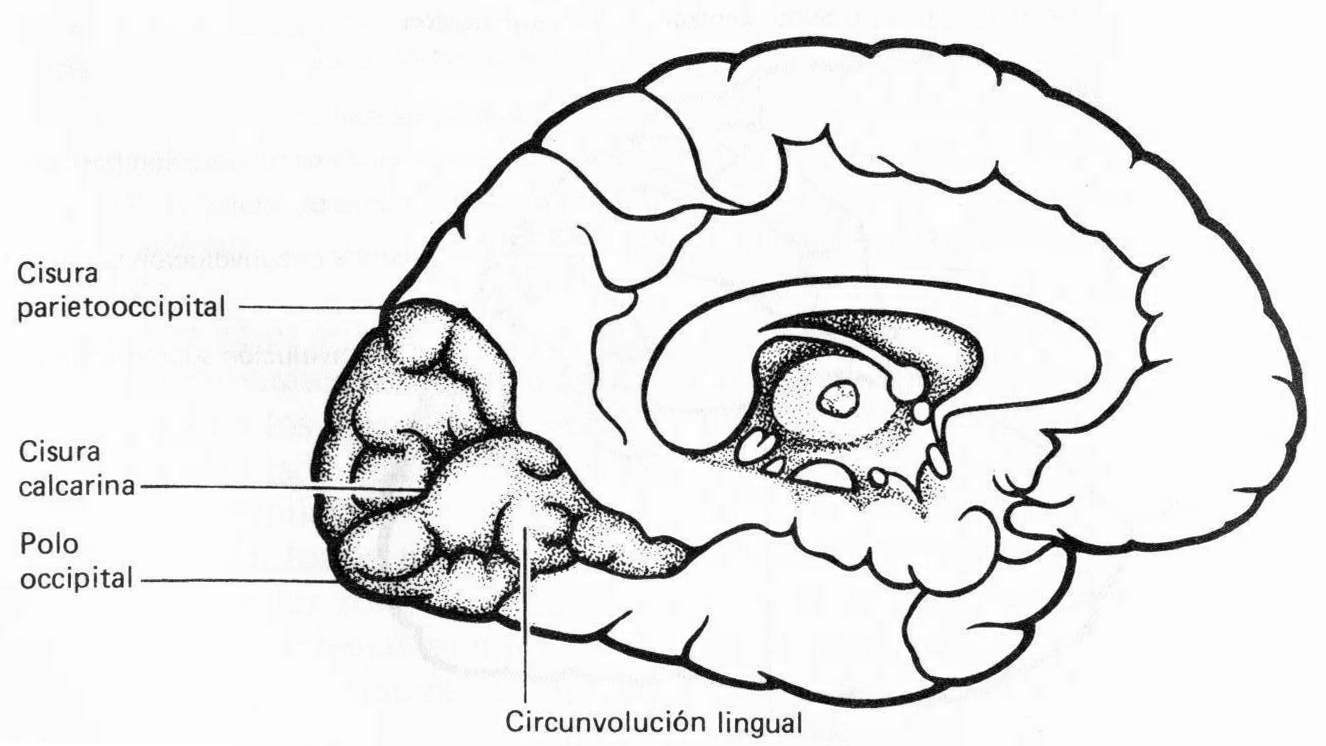 Other symptoms . The limbic lobe, which surrounds the corpus callosum, was named by Broca, but it was Papez who created the concept of the limbic system (Fig. 83-5), including numerous neighboring and central parts of the brain, such as the septal region, the trigone , the anterior and intralaminar nuclei of the thalamus, the fornix, etc. This system appears to regulate affect, emotions, and behavior, but for somatic, sensory, and visceral behavior, permanent activity of the reticular formation and the anterior nuclei of the thalamus and brainstem is required. There are numerous experimental conditions, produced by stimulation or ablation, which cause interesting modifications in experimental animals; but it has never been possible to attribute with certainty an exclusive limbic pathology in man.

The corpus callosum is the largest commissure of the brain; lesions at different levels of its long journey condition apraxic signs that have revealed dominance linked to language and auditory perceptions, while the "minor" side has precedence in terms of visual and spatial perception. Currently well-controlled clinical studies cast doubt on the absolute reality of these facts, since it has been seen that patients who have undergone a total callosotomy do not present significant alterations in psychological tests.

The hypothalamus (Fig. 83-6) is the ventral region of the diencephalon, closely related to most of the rest of the central nervous system; It is the coordinator of the visceral and endocrine functions, it determines in part the rhythms of sleep, and it has to do with the regulation of temperature and food intake; It is considered the superior center of the vegetative system and it has been found that its anterior part has predominantly parasympathetic functions, while the posterior part would correspond to the orthosympathetic one. Its endocrine function is of great importance and it is believed that in the hypothalamus there are two systems: 1) the magnocellular, related to the posterior lobe of the pituitary, which produces two hormones, oxytocin and vasopressin or antidiuretic hormone, whose functional alteration causes diabetes insipidus and the picture of inadequate secretion of antidiuretic hormone; and 2) a parvicellular system, or hypothalamic control of the anterior pituitary function, which is added through the pituitary portal vessels, a series of substances, some releasing hormones (releasing hormones) and others less inhibitory, such as that of prolactin and somatostatin, whose alterations modify the functioning of the anterior lobe of the pituitary gland and produce conditions that are studied in the corresponding chapter. 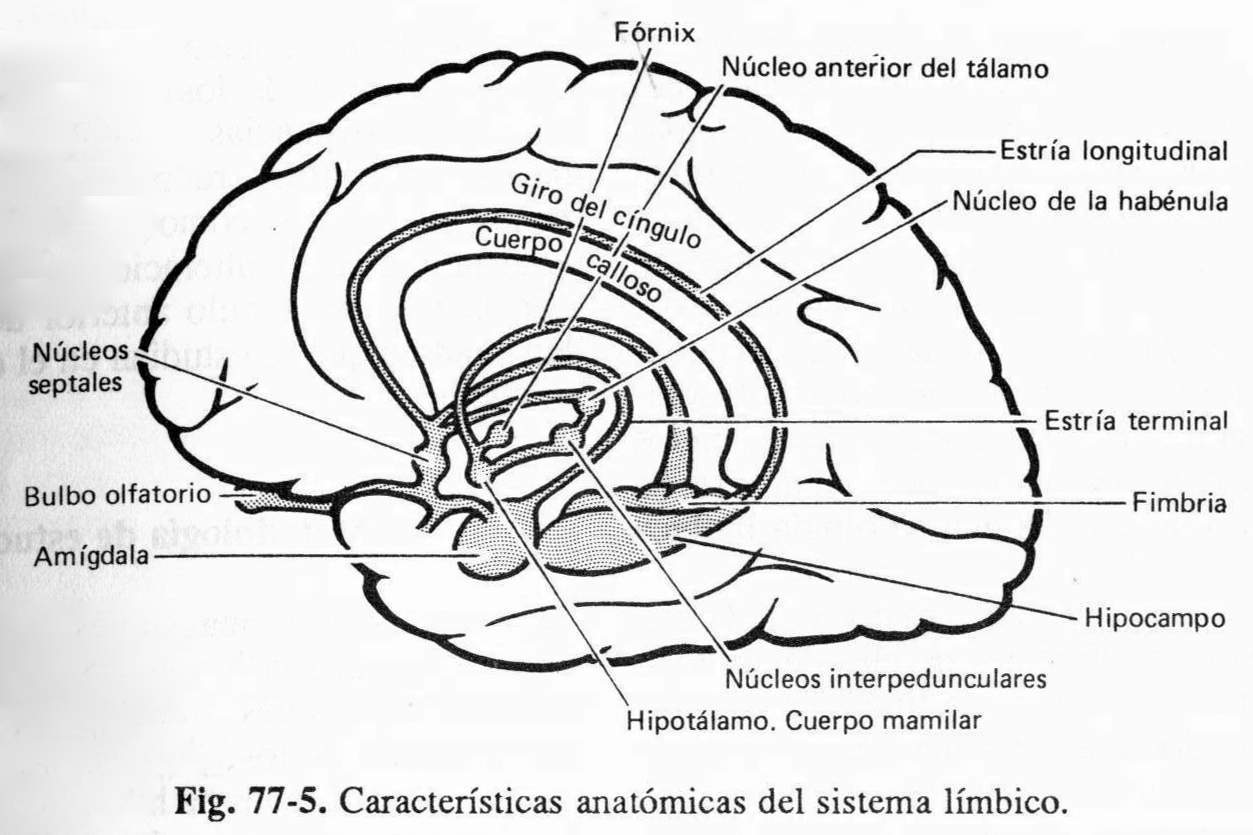 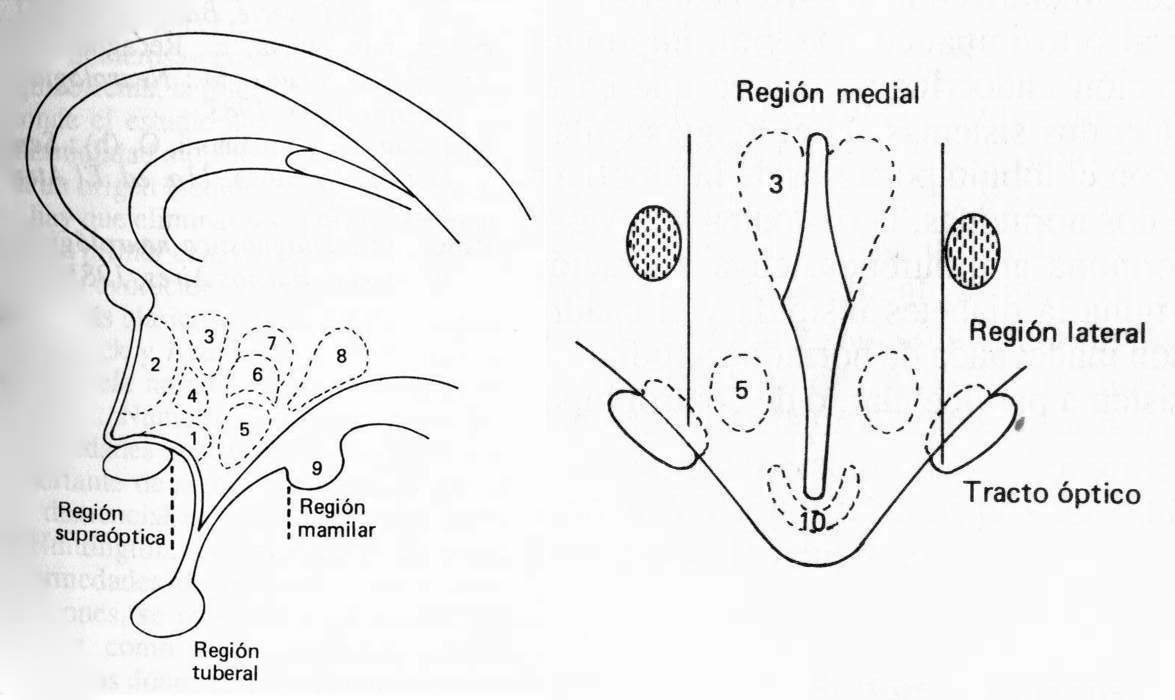 The anamnesis and a good investigation of the symptoms are the classic methods to determine the lobar lesions of the brain. But the advent of modern diagnostic imaging methods has made it essential to use them to confirm clinical findings and to define with highly satisfactory precision the very etiology of the process and its precise extension, limited to all or part of a lobe, or extending outside of Its limits. The two basic methods are computed axial tomography and nuclear magnetic resonance imaging, the foundations of which are known and whose use is essential to determine the diagnosis of lobar lesions. The other image methods serve as a complement for exceptional cases or particular reasons.